Update 1/May/2020: you might also be interested in Fedora 32 on a ThinkPad P1 (Fedora 32 works very well without the Nvidia drivers, plus I’ve added some tips on cooling)

Before we begin, a couple of Fedora 30 resources which may be useful:

As a reminder, here are the specifications of my ThinkPad P1:

Note: in late 2018, there were reports that changing between discrete and hybrid graphics or changing the Thunderbolt settings caused issues.  This seems to be dependent on the version of BIOS being used.  Reference: Reddit thread: New BIOS to fix bricks and thermal issues for X1/P1 series from Lenovo. It is recommended to check your BIOS for updates before changing BIOS settings. Additional references:

Fedora has offered upgrades between releases for quite some time.  In my case, I tend to prefer a clean install to get rid of any cruft that may have built up since the last release.  Everything important is backed up after all, right?  And modern tools such as Ansible, Puppet, Git and shell scripts can bring the your system back to a known state.  Another benefit (depending on your point of view!) is you can check out the newer installer options which somewhere down the line will end up in enterprise distributions like RHEL.

Using my existing Fedora installation, I created a Live USB of Fedora 30 workstation:

where /dev/sdX is the path to a USB disk.  Remember, all content on the USB will be wiped!

For the install, I did not hook up a monitor to the ThinkPad P1.  My BIOS settings were as follows:

Booting from the USB with the default options I proceeded to first setup my network (wired and wireless).  I set the hostname by searching for “About” (View information about your system) before clicking on the “Install to Hard Drive” option to begin the installer.  Remember, if you chose custom partitioning, you probably want to set /boot/efi as /dev/nvme0n1p1 or whatever, but DO NOT format it if you plan to boot multiple operating systems.  Once complete, I selected Power Off from the menu but the laptop took a while to shutdown.  “A stop job is running for the Login Service” was shown and the delay timeout went form 90 seconds, to 3 minutes to 6 minutes.  I eventually powered off with the physical power button.

However, after entering my details in the gnome-initial-setup screen I was presented with a screen with the wallpaper showing.  Use of the power button in Gnome nothing happened.

Whilst I probably could have rebooted with “acpi=off” as a kernel option, I decided to perform another install using the following approach instead:

Notes on this selection:

As before, I proceeded to first setup my network (wired and wireless) and set the hostname before clicking on the “Install to Hard Drive” option to begin the installer.

At this point, we are running the standard Fedora distribution without proprietary drivers but we have the Advanced Configuration and Power Interface (ACPI) off.  If you don’t care about battery life (you are running on mains power) then this may be good enough for you.  Note that you’ll probably need to power off your laptop via the power button when doing a shutdown.

My preference is to first install the NVIDIA drivers, reboot and then re-enable the ACPI setting.  This allows me to keep BIOS settings to ‘hybrid graphics’ so that the integrated GPU can be used when I boot back into Windows, but I get the benefits of proper power management in Fedora.

One downside of this, you must disable Secure Boot – RPM Fusion – NVIDIA Howto
So, before proceeding, go back to BIOS and DISABLE SECURE BOOT.

Launching ‘Software’ in Gnome for the first time should prompt you to confirm whether you want to enable Fedora Third Party Software Repositories.

In the event that this doesn’t appear you can run the following command which adds the required repositories in /etc/yum.repos.d.

Enable the “RPM Fusion for Fedora 30 – Nonfree – NVIDIA Driver” repository by clicking on the menu icon on the right hand side of the Software utility.

Search for ‘nvidia’ in the software window and the ‘NVIDIA Linux Graphics Driver’ should be listed.  (Note, I could not see this at first, but a reboot made this available – there’s probably a way to refresh the cache that software utility is using). 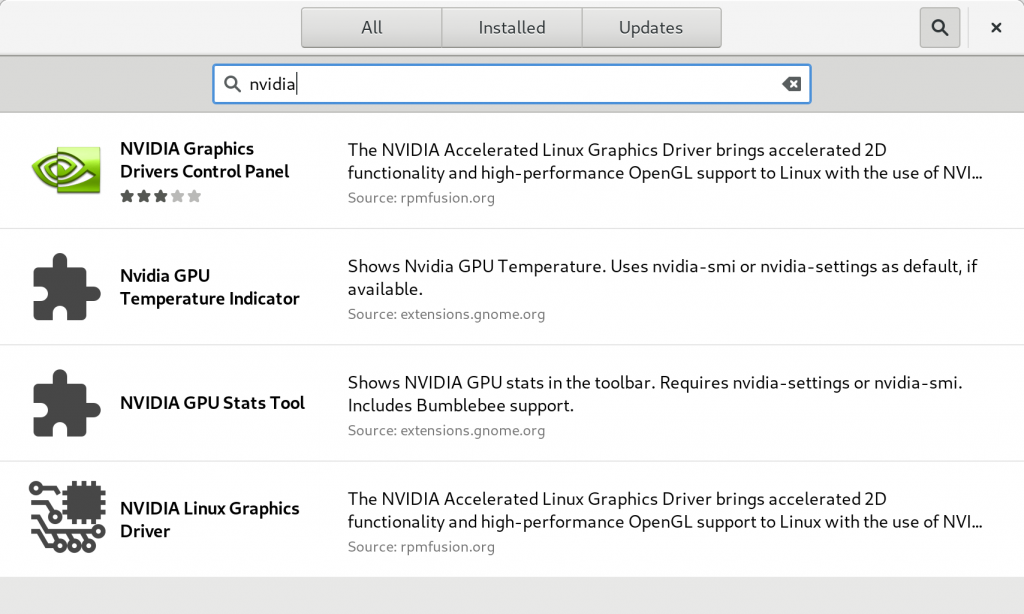 Select the NVIDIA Linux Graphics Driver.  The following will appear giving some details about the package and the source – RPM Fusion:

The installer does the following:

It’s worth checking these files exist before proceeding (the exact path might change if you are running a different kernel).  If they don’t, make sure that the version of the kernel-devel package that’s installed matches your running kernel (dnf install kernel-devel-5.0.9.301-fc30 for the example above) and then run “akmods –force”.  Also verify with:

I proceeded to reboot the laptop – first with the ‘acpi=off rhgb quiet‘ options and then without them.  Both options allowed me to boot into the graphical desktop and removing the acpi=off flag allows all the CPUs to become visible and the power management functionality works correctly – battery levels, brightness levels with the function keys, etc.

To remove the ‘acpi=off rhgb quiet’ entries from the EFI menu when new kernels are installed the following is performed:

Edit /etc/default/grub and identify the GRUB_CMDLINE_LINUX stanza which should read something like this:

To make this change take effect with all existing kernels that have been installed:

Verify /boot/efi/EFI/fedora/grubenv is as expected and optionally reboot.  Note that I chose to remove the rhgb and quiet options from the boot loader.  This generates extra message on the console but these can sometimes be useful.

The kernel modules with the NVIDIA driver must be rebuilt with each kernel update.  Using the NVIDIA packages from the RPM Fusion repository we installed from the Gnome Software Application takes care of this for us.

Important: after the dnf command completes it will take a short time (less than a minute) to compile the module. Do not reboot until this process completes.

TLP – Linux Advanced Power Management can enhance the battery life on the ThinkPad P1.  The installation is fairly straightforward.  To begin, install tlp and smartmontools from the standard Fedora repos:

The above is a good option if the ThinkPad is mainly used at a desk with a plugged in power supply.  This should extend the life of the battery.  The drawback is that if you need to charge the battery to 100% so you can work without the power supply, you’ll have to stop the TLP service or alter the settings.

For further information about these modules, see Which kernel module do i need for my hardware, tp-smapi or acpi-call?  I noted that the ‘akmod-tp_smapi’ module didn’t seem to be required on the ThinkPad P1 – but as per the previous link “remove the unnecessary module package…. However, it doesn’t hurt to keep both.”

Enable the service and start it at boot time:

To monitor the TLP service:
tlp-stat

With a few tweaks, Fedora 30 is running on the ThinkPad P1 using the NVIDIA Graphics driver and with ‘hybrid’ options selected in the BIOS.  TLP settings are working fine.